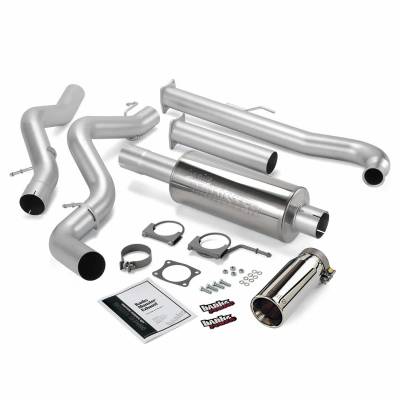 Physical fitment. Why consider a cheap, ill-fitting aluminized exhaust? Banks 4 inch Monster Exhaust is made of rugged, long-lasting 100 percent stainless steel. It fits better than the competition, because Monster Exhaust utilizes the factory hangers and maintains proper clearance to all under-vehicle components. All flow, show and go! With nearly five decades of engineering airflow improvements, Banks has mastered the art of maximizing flow while minimizing backpressure. The polished straight-through Monster Muffler, mandrel-bent head pipe assembly (non-cat-converter-equipped vehicles only), intermediate pipe(s) and tailpipe nearly triple the exhaust flow, cut backpressure up to 98 percent, lower exhaust gas temps and deliver more power to the ground. And the 5 inch polished rolled-edge tip has an adjustable clamp for positioning on tailpipe. Get it in your choice of chrome-over stainless or high temp black! Engineered to ditch the drone. Many straight-through mufflers deliver an obnoxious drone that overpowers conversations. Banks Monster Muffler is extensively sound-tested and engineered with a unique expansion chamber and high-temperature packing. Instead of a drone, you're treated to a rich exhaust note that's authoritative, yet civil. It sounds as great as it looks!