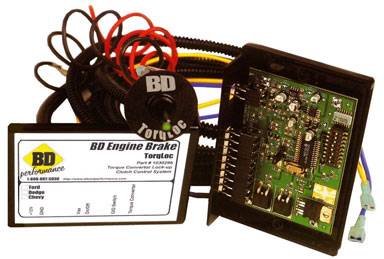 You Decide When the Torque Converter Locks or Unlocks for Maximum Control!

Command the torque converter to stay locked, stay unlocked, or revert to OEM settings with the BD TorqLoc. Flip the toggle switch to position one, and the lock-up clutch is engaged, so transmission temperature remains low and the exhaust brake can work with 100% effectiveness (this is a manual setting and should only be selected under light load/light power conditions, such as highway driving).

Position two reverts back to stock function, or can be wired to unlock the torque converter. Position three acts as an AutoLoc by commanding lock-up only when the exhaust brake is engaged - perfect setting for every day driving in all situations.

Additionally, the TorqLoc has an Overdrive inverter option which allows the transmission to start out in Drive which will prevent upshift into the Overdrive gear - great for those who live in city/urban areas. Also, if you have a BD Valve Body with the second gear lock-up capability, the lock-up can be set to hold until 5-10 mph.

Also available is the Torq/UnLoc which acts the same as the TorqLoc but in the third position the converter is prevented from locking up.