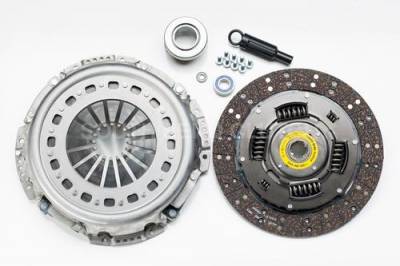 Repair / Replacement Clutch Kit for South Bend Clutch Kit # 12125-OFEK 475HP which converts stock 12 1/4" to 13-1.25" clutch. Other than the flywheel, this kit comes with everything you need to do the job, including Throw Out Bearing and Heavy duty roller pilot bearing (already installed).

This Dyna Max kit features a performance organic lining on a marcelled fin. The pressure plate is modified for higher plate load and smoothness of engagement. This clutch was designed to cure premature disk failure due to high horse power and heavy hauling in the 5 speed and early 6 speed NON-High Output 12 1/4" clutches. We have taken the 13" High Output clutch and modified it to accept the 1 1/4" input shaft. By doing this, it enabled us to offer a disk center that is 2-3 times larger and stronger then can be provided in the 12 1/4" clutch kits. Rated to handle up to 475 horsepower & 1000 ft. lbs. of torque.