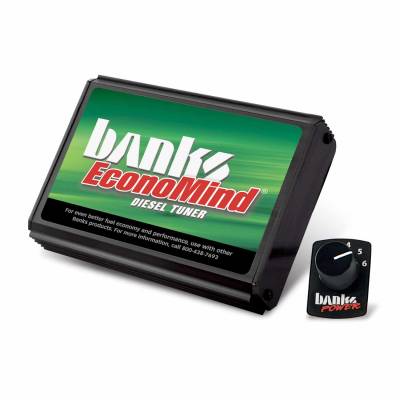 PowerPack calibration: +100 hp/+230 lb-ft. Advanced tuning for towing/work adds loads of power with built-in safety, adjust-on-the-fly power, fuel savings at every level and CleanTune Technology. Pyrometer and boost gauge recommended. A real piece of work. EconoMind is built for work. With Banks PowerPack, you've got the goods to haul the goods! EconoMind provides comprehensive fuel tuning and six levels of adjust-on-the-fly power that cut 13+ sec. off your 0-60 mph towing time! Works to improve your MPG, too. Thanks to its fuel economy features, EconoMind pays for itself over time! Honors the host vehicle instead of destroying it. Many tuners reduce fuel delivery as exhaust gas temps rise. But they ignore the powertrain! Banks finds the limits of the engine and powertrain, then adds mission-critical ActiveSafety safeguards to EconoMind so it will live within those limits. Result: safe, reliable power-and lots of it. Pyrometer and boost gauge recommended. All gains measured at the rear wheels, with recommended airflow improvements.

Economind Diesel Tuner (PowerPack calibration) with switch for use with 2004-2005 Chevrolet/GMC 6.6L, LLY