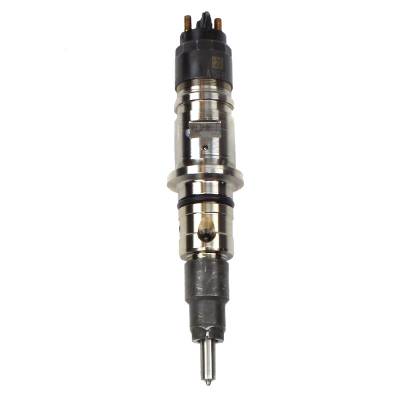 Single Injector - Be sure to change quantity to 6 if you need a full install set.

This item requires a Core Return or Core Charge

This R-Series (RACE) injector's nozzle has been extruded / honed twice and then calibrated for its intended flow rating. Superior quality from Industrial Injection.

Injectors such as these should only be used on a truck that has been modified to handle them. Upgraded intake/exhaust, fuel pump, electronic tuning, etc...

R-Series injectors and injector nozzles put a huge demand on the fuel system. Below is what we recommend.

You may have noticed that there are two types of remanufactured injectors that Industrial Injection offers ~ Either "Factory Reman" or "II Reman".

Factory Re-manufactured means that a Genuine Bosch re-manufactured stock injector is used as the base injector and then a freshly extruded/honed Industrial Injection nozzle is installed and calibrated to give you your desired percentage/HP over stock.

II or Industrial Injection Reman means that Industrial Injection uses the cores that are available to them or you send in your old injectors to rebuild. They then install their nozzles and calibrate to achieve your requested HP gains. They usually have plenty of cores to rebuild but sometimes will require you to send in yours to rebuild. The part numbers for those injectors are denoted with an "SE" near the end. If you are interested in having them rebuild your injectors this is a great way to have them done and bypass having to pay a core charge. Contact us on our toll free 1(800)823-4444 to check availability or arrange a rebuild!

LPM - Sometimes a rating of LPM is shown in the description of an injector or nozzle. LPM stands for Liters Per Minute. This is just the rating to show the highest potential flow at full fuel pressure and open throttle.