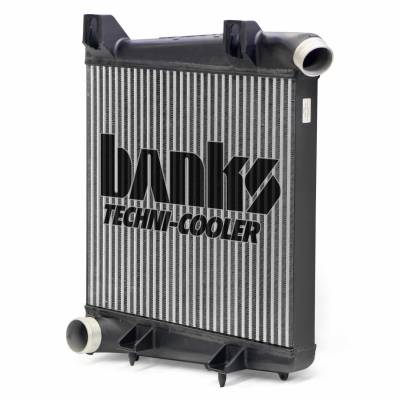 Eliminates restrictions, dramatically increasing the cooling capacity for massive continuous power; big aluminum end tanks won't burst like the plastic stock ones. Techni-Cooler dramatically increases the cooling capacity by balancing the richer fuel mixture with greater airflow and cooler, denser air. Denser air has more oxygen, which improves combustion as well as engine efficiency. Result: higher continuous power and more power at any exhaust gas temp (EGT), better fuel economy and lower EGTs. That's a truckload of benefits! Banks Techni-Cooler delivers the maximum reduction in boost air temperature with a minimal loss of boost pressure. It doesn't get any cooler than Techni-Cooler! Banks Techni-Cooler for the 6.4L Power Stroke produces quicker throttle response, higher continuous power at any exhaust gas temperature, better economy and a more reliable rig. It's the best aftermarket improvement you can make, especially if you climb steep hills or do heavy-duty towing. Built to win. Our Techni-Cooler s for the 6.4L Power Stroke are built right from the start with high-flow streamlined cast aluminum end tanks, and formed tube construction for better air flow to other vital cooling systems. We could have used welded up sheet aluminum end tanks and crude bar-and-plate cores like the other guys, but that's just cheap, shoddy backyard construction. It's not good engineering and it's not the way we do things at Banks. A Better bargain, too. Compare prices and you'll see that even with its vastly superior construction and performance, Techni-Cooler is priced lower than many of our competitors. Put it all together, engineering, efficiency, economy and you'll see that going with Banks Techni-Cooler is hands down the best choice.